Georgia's Own will be closed on Monday, January 20th in observance of Martin Luther King, Jr. Day

Thank you for choosing Georgia’s own!

So, you got a tax refund – now what? While you might have morphed into a human version of the “money-mouth face” emoji (🤑), fight the urge to treat yourself. Unless you’re debt free and have a nice chunk of change in your savings and retirement accounts, getting financially fit should be your priority over splurging on big-ticket items.

Here are five ways to use your refund responsibly:

Tackle your debt. If you’re carrying high-interest debt, paying it off should be your top priority. Paying interest sucks, and if you’re carrying a large balance on a credit card but only making the minimum payment each month, you may never feel like you’re getting ahead. Use your tax refund to pay off any debt you have. If your refund doesn’t cover everything, it’s time to figure out a debt-payoff plan.

Save it. More than half of Americans don’t have enough in savings to cover a $1,000 emergency, according to Bankrate. If you’re just starting out, money might be a little tight, making it even harder to build up your savings. Think about tossing your tax refund into your savings account so you’re better prepared for life’s little surprises. If your emergency fund already has enough money to cover at least 3–6 months of expenses, consider setting up another savings account for a specific goal, such as a travel fund or a down payment for a new car.

Donate it. Helping others gives us the warm-and-fuzzies, so why not use your refund for good? When your budget is tight, it can be hard to find extra money throughout the year, so donating the cash from your refund is a perfect opportunity to make a difference. Plus, your charitable donation could be tax-deductible next year.

Spend it (on something you need). The keyword here is need. If you’ve been putting off car repairs or minor medical or dental procedures, your tax refund could help you cover these larger, but necessary, expenses.

Spend it (on something you want). Okay, okay…I know I cautioned against splurging, but if you’ve stuck to your budget, saved, and stayed out of debt all year, you’ve earned the right to buy yourself something nice. Just don’t get carried away, of course!

I didn’t get a huge refund. Did I do something wrong? Nope, not at all! Your tax refund isn’t free money; it’s money you overpaid to the government over the course of the year. If you owe money on your taxes, it means you didn’t pay enough out of each check. Take the time to periodically check your withholding and adjust if necessary (the IRS has a handy calculator on their website that can help you out). Paying attention to your withholding is important for two reasons: 1) if you don’t pay enough from each paycheck over the year, you could face an unexpected bill when you file your taxes, and 2) if you normally get a large refund, you can opt to have less withheld up front—your paychecks will be a little higher, giving you more flexibility each month. 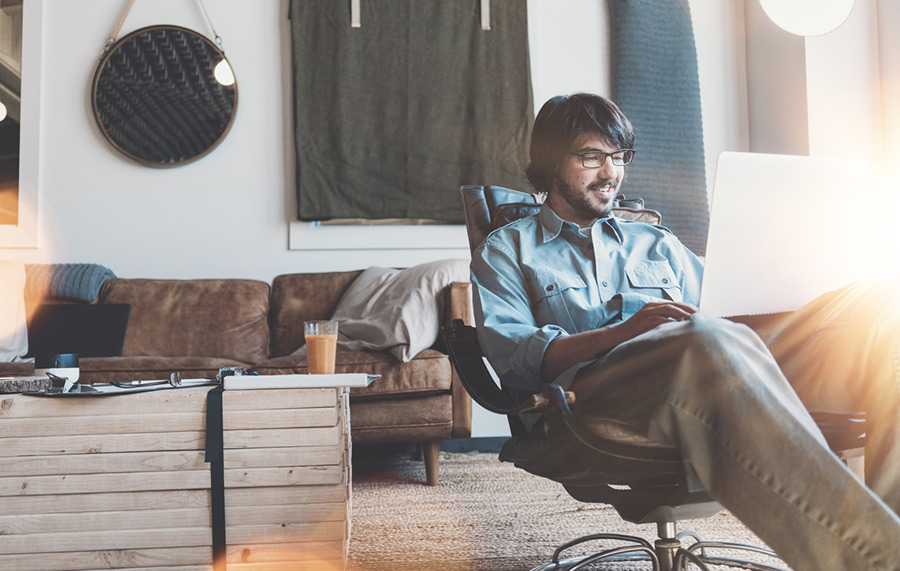 Monday, April 15, 2019, is tax day for most of the United States. Fun fact, though, if you live in Maine or Massachusetts, it’s April 17th. That’s because Patriot’s Day is a legal holiday in those states and apparently, you can’t do your taxes and celebrate at the same time.

Logically, the deadline should be moved to Tuesday, April 16th, but to complicate things further, that’s Emancipation Day in Washington, D.C., so the federal government won’t be there to accept them. Voila! Two extra days.

It seems that each year, there are more changes to the tax code and keeping on top of them can be quite the challenge. If you remember, President Trump signed the Tax Cuts and Jobs Act into law in December 2017. For the most part, the bill didn’t affect individual income taxes until the 2018 tax year, which brings us to today.

The good news about the new plan is that, among other things, it was designed to simplify the tax system. How it will affect your individual return depends on your income, the deductions you take and your filing status. Here’s what you need to know:

Originally, the proposed new tax plan called for a reduction in the number of tax brackets. The final number of brackets remained at seven, but the rates were changed. The new tax brackets are 10%, 12%, 22%, 24%, 32%, 35%, and 37%. They’re important because they affect the amount of income you receive during the tax year and help calculate the amount of your annual tax bill.

The standard tax deduction for all filers was nearly doubled under the new tax plan, but they’ve also eliminated the personal exemption. For single or married taxpayers who are filing separately, the 2018 standard deduction is now $12,000. If you’re filing a joint return, it’s $24,000 and heads of household qualify for an $18,000 deduction.

Another beneficial change is that if the CTC reduces your tax liability to zero, you’re now eligible to receive a refund for the credit up to $1,400. The adoption credit remains the same and is worth up to $13,750 per child.

For the tax year 2018 (and retroactive to 2017), you can deduct qualifying medical expenses that exceed 7.5% of your adjusted gross income (AGI). But, beginning January 1, 2019, you may only deduct the amount of the total unreimbursed allowable medical care expenses that exceed 10% of your AGI. Also, beginning in 2019, individuals who choose to go without healthcare coverage will not be subject to any tax penalties.

Homeowners can still deduct their mortgage interest payments, but for 2018 and beyond, the new limit was reduced to $750,000 from $1 million. If you’re married and filing separately, the deductible mortgage interest limit is $375,000. Also, the interest deduction on home-equity loans has been eliminated.

In previous tax years, taxpayers were able to deduct state and local income and property and general sales tax payments on their federal tax returns. As a result of the new tax law, your total state and local tax (SALT) deductions are now capped at $10,000.

Other deductions that are going away

Aside from the changes we mentioned above, here are some other deductions will be no longer apply to your 2018 tax filing:

When President Trump signed the tax reform bill into law, it made major revisions to the tax code. In fact, the bill represents the most significant tax changes in more than 30 years. For the comprehensive list of changes, click here.

Tax time! Here’s a run-down of everything you need to do before the big date

Tax day can be a dreaded date on the calendar for a lot Americans. Heck, even the post office feels sorry for us. Why else are they willing to keep their doors open late just to help postmark our tax return in time?

To make your tax day easier, we’ve compiled a list of things you need to or can do before the IRS’s red-letter day:

This year, tax day is April 17, 2018. Think of it as a gift from the IRS. Because April 15th is a Sunday, and D.C celebrates Emancipation Day on April 16th, you earn two additional days of interest on the money you set aside for your tax bill and 48 hours to dig through your receipts looking for another deduction.

There’s not much you can do after December 31 that will affect your 2017 taxes, but every bit counts. If you have a Roth or Traditional IRA and haven’t maxed out your contribution, do it by April 17, and you can potentially lower your tax bill. It’s the last day to make a contribution for 2017, regardless of whether it’s tax deductible or not. If you’ve filed for an extension and have a Keogh or SEP IRA, you’ll have until October 15, 2018, but it’s smarter to start your tax-free compounding sooner than later.

Do you know the documents you’ll need to complete your tax return? Don’t leave it to the last minute or you may run out of time. Collect all of your W-2s,1099s, and any mortgage statements. These should have arrived in your mailbox by January 31, 2018. Gather receipts for tax-deductible expenses, bank and brokerage statements, rental property income information, social security numbers for dependents, and any other documents you need for your return. There’s nothing worse than being “in the zone” and having to stop to look for another piece of paper. Plan ahead and avoid the frustration.

Use the right tax form

Yes, most tax forms can be found at the library or post office, but why make a trip if you don’t have to. Go straight to the online source: the Internal Revenue Service. The site can also link you to a list of government websites where you’ll be able to find your state forms, too.

If you don’t think you’ll be able to file your taxes by April 17, be sure to file Form 4868 for an extension. You’ll get an additional six months to finish, which will bring you to October 15, 2018. It’ll give you more time for the paperwork, but it won’t delay any tax payment, however. You’ll have to reasonably estimate your tax liability and include payment when you file your request. Don’t let that deter you, though. If you file late without having filed for an extension and you wind up owing the IRS, you’ll also be hit with a late-filing penalty AND a late-payment penalty!

The IRS processes electronic transfer more quickly than paper, so if you expect a refund, file electronically. You’ll likely get it three to six weeks sooner. Request a direct deposit to your bank account and it’ll be even faster–and it’s guaranteed not to get lost in the mail!

If you owe the IRS, you can still file electronically and then wait until the deadline to send payment. Include a check with Form 1040-V, or pay via direct debit or with a credit card. Know, though, that a credit card will include an additional service charge that can be as high at 2.5 percent. On the other hand, a direct debit should allow you to delay the transaction until the filing deadline.

If you’ve had a life-changing event in 2017 or your taxes are more of an overwhelming task than you’d like to tackle, consider a professional preparer. You’ll still need to collect your documents and answer some questions, but a professional may help alleviate some of the headache and offer you more confidence. Don’t wait, though. They’re under the same filing deadline as everyone else and there are only 24 hours in a day!

You are now leaving the Georgia’s Own Credit Union website. The site you are about to visit is operated by EverFi, Inc. Georgia’s Own has partnered with EverFi, Inc. to provide you with financial education tools. EverFi’s privacy and security policies may differ from those practiced by Georgia’s Own.

You are now leaving the Georgia’s Own Credit Union website. The site you are about to visit is operated by BALANCE. Georgia’s Own has partnered with BALANCE to provide you with financial education tools. BALANCE’s privacy and security policies may differ from those practiced by Georgia’s Own.